You are here: Home / Start

Watch this video first. It provides a good overview of the dangers of 15-passenger vans. 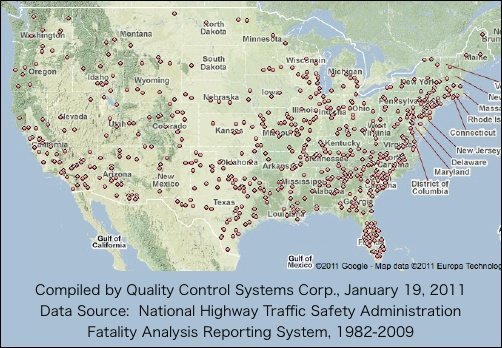 From 1982 through 2009, there have been 740 fatal rollovers of 15-passenger vans in which an occupant of the van was killed in the United States. These crashes killed 1,183 persons and incapacitatingly injured an additional 1,990. More than six thousand persons have been involved in fatal rollovers as drivers or passengers in the vans, of whom only 309 were known to be uninjured in these crashes. Because the victims were relatively young, 39,843 premature years of life (before age 70) have been lost in rollovers of 15-passenger vans since 1982. Fatal, 15-passenger van rollovers have also occurred in Mexico and Canada.

That puts the 15-passenger vans as one of the top members in the hall of shame–those vehicles that have the highest incidents of single-vehicle rollover accidents. Most of these are vans are the Ford E-350, aka. Ford Econoline XLT.

Fact #2: In many of these accidents, the rollover was triggered by a left rear tire de-tread!

Because of design flaws in the vans, 45% of the weight of the vehicle is distributed to the left rear tire. This causes the tire to generate excessive heat. The failure is increased exponentially when the tire is under-inflated. There are numerous design flaws, some of which are highlighted on the following video:

Note: The FARS database does not record which tire failed in a rollover accident. This left rear tire facts are based on news stories, surviving family reports, and lawsuit public records.

Fact #3: NHTSA has issued 4 warnings for 15-passenger vans. More than any other vehicle.

The government agency responsible for National Highway Transportation Safety (NHTSA) has known about the dangers of 15-passenger vans for years. Click here to download a NTSB safety brochure on 15-passenger vans.

Fact #4: In most states, it is illegal to transport public school children in a 15 or 12-passenger van.

This includes private parties who transport children to and from a public school. Most public schools, large non-profits, and franchised day-care centers have sold their vans, which has created a huge supply of used 15-passenger vans on the market. Unfortunately, these are being purchased by small churches, large families, and missions groups who think they are getting a “great deal.” The government has banned the sale and use of 15-passenger vans for a reason. These vans are simply not suitable for transporting children. And yet, small non-profits and private parties continue to use them because they don’t require a commercial license to drive and they think they can’t afford anything else. The following report lists the states that have banned 12-and-15-passenger vans for transporting public school children.